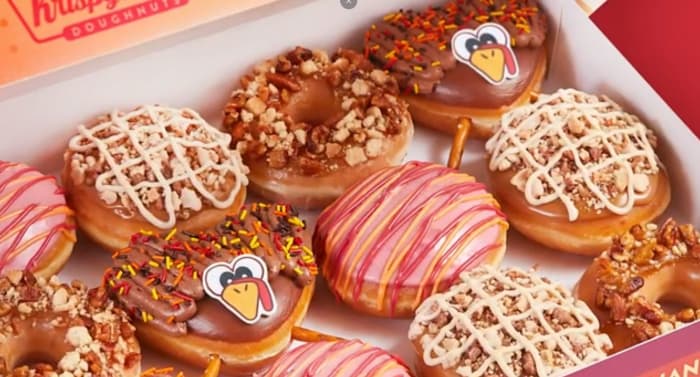 This is a white chocolate ice cream base blended with dark chocolate-filled peppermint bark and sprinkled with crunchy pieces of peppermint candy. It’s available in 14-oz cartons, ice cream bars, and cookie squares for a limited time in participating stores nationwide.

Keebler Gingerbread Fudge Stripes Cookies combines gingerbread with vanilla fudge for a melt-in-your-mouth snack. They are available for a limited time in participating stores for a suggested retail price of $3.99 per pack. The new Kit Kat Gingerbread cookie has the traditional layers of Kit Kat wafer covered with a gingerbread-flavored cream. These come in 6.9-oz and 8.4-oz packs for suggested prices of $2.99 and $3.49 respectively, but prices may vary. They are also only available for a limited time for the holiday season! Blue Bell French Vanilla Ice Cream has returned to stores for a limited time. It is similar to their creamy Homemade Vanilla ice cream, only with an added taste of egg custard.

This flavor is available in a half gallon size, so get it while you can! These feature a mixture of coffee caramel and coffee marshmallow covered in milk chocolate or dark chocolate respectively.

These are sold in boxes of 6 for $10. Fans can vote which of these is to become a permanent variety by purchasing the item and voting using the QR code.

Other items available for Fall include: Cranberry Orange Truffle, Apple Pie Truffle, Pumpkin Pie Truffle and Pecan Pie Truffle. Each of those come in a box of 6 for $9.

All of these items are available from stores or Online for a limited time. Baskin-Robbins has added two items to the menu this month! These include:

These are available from participating locations nationwide for a limited time. There are also a wide range of items available featuring Carvel’s Cookie Butter. These items are available at participating Carvel locations for a limited time. These are the new IHOP Hand-crafted Melts:

These melts are available at participating locations nationwide. There are 4 exciting Thanksgiving doughnuts on the menu at Krispy Kreme:

These are available for a limited time at participating locations nationwide from November 8, 2021. The Chick-fil-A Peppermint Chip Milkshake is hand-spun and features Chick-fil-A ice cream dessert and real peppermint bark chips. The milkshake is finished with whipped cream and a cherry.

This is available at participating locations nationwide for a limited time. The Italian Original Chicken Sandwich is made with a lightly breaded patty of white meat chicken topped with two slices of mozzarella cheese and marinara sauce on a sesame seed bun.

This is available for around $5.89 or as part of the brand’s 2 for $7 deal, but prices may vary by location.

Some locations will begin selling the sandwich November 8, and it will be sold at all participating locations nationwide from November 14, 2021 for a limited time. Both of these favorites are available now at participating locations nationwide for a limited time. The Cinnamon Roll Pie Breakfast includes warm cinnamon rolls baked inside a pie crust and then drizzled with cream cheese icing. It is available all day and served with two eggs, a choice of bacon or sausage, and fried apples or hash brown casserole.

Other holiday offerings include Pumpkin Pie, which is available through November 28, along with both Chocolate Pecan Pie and Apple Streusel Pie, which can be purchased through December 24, 2021. A whole pie costs around $11.49 but prices may vary.

Additionally, the Country Fried Turkey is returning to the menu. This features hand-breaded sliced turkey fillets with roasted pan gravy, two Country Sides, cranberry relish, and either buttermilk biscuits or cornbread muffins. This Is available through November 28, 2021 and would go great with pumpkin pie for dessert! The Wienerschnitzel Apple Jacks Dipped Cone is made with a cone filled with vanilla Taste Freez Soft Serve that is dipped in a sweet coating with crunchy bits of Apple Jacks cereal that harden to give it a crunchy outer shell.

Wienerschnitzel’s Apple Jacks Shake has a vanilla Taste Freez Soft Serve base, with bits of Apple Jacks cereal swirled through it.

These are available at participating Wienerschnitzel and Hamburger Stand locations nationwide for a limited time. The Taco Bell Double Steak Grilled Cheese Burrito has a double portion of both marinated steak and seasoned rice with crunchy red tortilla strips, creamy Chipotle sauce, warm nacho cheese sauce, reduced-fat sour cream, and a three cheese blend of cheddar, mozzarella and pepper jack, all wrapped in a warm flour tortilla. It has a suggested price of $5.49 but may vary. You can also order a spicy version the includes jalapeños or a Double Chicken or Double Black Bean version if you are not a fan of steak.

The Original Grilled Cheese Burrito has marinated beef, seasoned rice, crunchy red tortilla strips, three cheese blend, Chipotle sauce, nacho cheese sauce, and reduced-fat sour cream, wrapped in a warm flour tortilla. This has a suggested price of $1.99 on its own or $6.99 in a box combo with Chalupa, Doritos Locos Taco, chips and nacho cheese, and a medium drink. Prices may vary.

These are available at participating locations for a limited time. Taco Bell Rewards Members can also order online or via the Taco Bell App! This combines hot tortilla soup with your choice of meats, rice and beans, and flavors including sour cream, pico de gallo, 3-Cheese Queso and guacamole, all served in a crunchy, edible tortilla bowl.

Which of these new and interesting items are you most excited about? Let us know in the comments below!