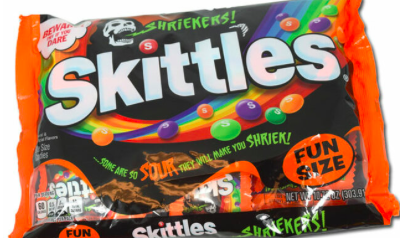 We are starting the week off with something “frightfully good” with this Skittles Shriekers review!

For those who haven’t heard of them yet, Skittles Shriekers are a newly released Halloween-themed candy with 5 spooky named flavors. The fun part is that, according to the packaging, “some are so sour they will make you shriek!” Why only some and are they really sour? We found a pack of fun-sized bags at Walmart, and will answer those questions and more in this Skittles Shriekers review! Skittles Shriekers features a unique 5-flavor mix, with each of the flavors having a cool, Halloween-themed name:

We can verify that all those flavors are in the mix, and they go well together. How do you tell lime and green apple or citrus and tangerine apart though? Good luck, because it’s not easy 😉 Apparently, the fun part of eating these comes from them being a bit more of a trick than a treat. Our sour candy fans expected Skittles Shriekers to all be at least somewhat sour, while the sweet candy fans thought after the first reluctant taste that the Skittles Shriekers review process would be a sweet one.

It turns out that none of us had the right idea!

First impressions of this candy will likely be sweet like regular Skittles. Although, they have the potential to be quite sour, depending on the flavor you happen to select. Our reviewers found that the majority of each pack is not sour, but there are random Skittles spread throughout that are, in fact, very sour.

We agree Skittles Shriekers are best eaten two at a time. It’s more fruity that way and helps mute the sweetness for sour fans and the sour flavor for sweet fans. Beware if you happen to be unlucky (or lucky?) enough to get two sour ones at the same time though!

The green ones are the best, and yes, that does include both lime and green apple. Green apple tastes like a sweet, delicious green apple, while the ‘Shocking Lime’ flavor can be shockingly sour and flavorful in its own way!

The consensus is that Shriekers are tasty, even if they are a bit tricky. These are perfect for kids or the young at heart due to both the potential for tricking people with them and the fun of not knowing what you are going to get next while enjoying your bag of Shriekers!

Skittles Shriekers are available for a limited time nationwide, so pick some up at the store while you can!

Do you agree with this Skittles Shriekers review? What do you think of them? Let us know in the comments! 🙂